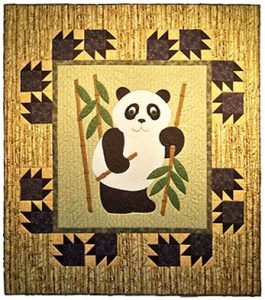 Judy S. from Texas and her then 18 year old son attended the March 2010 Quilt Celebration in Dallas. Her son spotted our Amanda Panda hanging in our booth. He purchased the pattern and persuaded his mom to stitch it for his girlfriend’s birthday.

Judy recently sent us pictures, saying that they were able to have it ready for the birthday.

A larger finished size was desired, so pieced bear paw squares, as well as strips and blocks of bamboo fabric, were stitched around the central panda design. Fur and other details were created with quilting. Two close-ups are below.

UPDATE: Judy dropped our booth at the 2014 Quilt Celebration and reported that her son and his girlfriend are now married. Congratulations to the newlyweds! 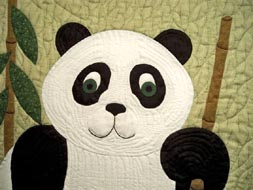 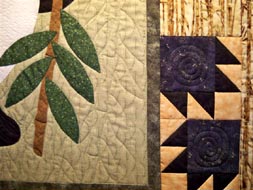